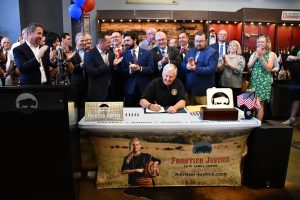 The Second Amendment Preservation Act is now law in the State of Missouri.

At Saturday’s signing in Lee Summit, Governor Mike Parson used Kamala Harris as an example of why signing the bill into law is necessary “you’ve had the Vice President of the United States, back when she was running for President if you remember this….and any particular weapon she decides that she didn’t like, she was going to come to your door and take it away. Well, not in Missouri she’s not!”

Under the new bill, it would be unlawful for any person or entity to deprive a Missouri citizen of their right to bear arms “when the Federal Government seems to want to tell us what we can do, it’s suppose to be the opposite of that. We’re the ones who are representing the people of the United States of America, we are! And trust me, the states are the firewall to the Federal Government!”

During the signing ceremony, Parson said law enforcement’s ability to assist federal officials in other situations will not change.

But the bill does make it illegal for any person or entity to knowingly deprive the people of Missouri of their right to bear arms.

If it does happen, the person or entity will be held liable and each occurrence would result in a $50-thousand dollar fine.

Read more on the signing:

“Throughout my law enforcement career and now as Governor of the state of Missouri, I have and always will stand for the Constitution and our Second Amendment rights,” Governor Parson said. “This legislation today draws a line in the sand and demonstrates our commitment to reject any attempt by the federal government to circumvent the fundamental right Missourians have to keep and bear arms to protect themselves and their property.”

Additionally, the bill is an acknowledgment that the right to keep and bear arms is fundamental and inalienable, and that the nation’s federalist constitutional structure limits the federal government’s authority over states.

Under HB 85, any person or entity who knowingly deprives Missouri citizens of their right to bear arms – as protected by state and federal constitutions – will be liable for redress and monetary damages of $50,000 per occurrence. Local law enforcement’s ability to assist federal officials in other instances remains unchanged under this legislation.

“HB 85 puts those in Washington D.C. on notice that here in Missouri we support responsible, law-abiding gun owners, and that we oppose government overreach and any unlawful efforts to limit our access to firearms,” Governor Parson said.

Security Guard Attacked At Backwater Jacks Over The Weekend