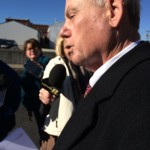 A new barrier has been put up at a popular lake area attraction. Construction of the Ha Ha Tonka Castle began in the early 1920s by Robert McClure Snyder before being finished by his sons after he died in a fatal automobile accident. The castle then burned in the 1940s and has since become a major attraction to the area. Unfortunately, age is getting the best of the structure with parts of it beginning to crumble. A new wooden barrier has been placed because of this. At this time, plans for the future of the castle’s structure are unknown.