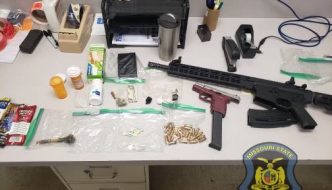 A Camdenton man’s facing four counts of Sexual Misconduct with a Child Under 15.

According to the Lebanon Police Department, Gordon Bruce Mitchell is accused of exposing his genitals to four different children ages 10 through 12.

As of this evening, Vinelink shows that he has posted bail and is no longer being held at the Camden County Jail.

Read more from the Lebanon PD:

On July 25, 2021, 74-year-old Gordon Bruce Mitchell of Camdenton, Missouri was charged by the Laclede County Prosecutor’s Office with four (4) counts of Felony Sexual Misconduct 1st Degree involving a child under 15 after an incident that occurred at the Lebanon YMCA on July 21, 2021.

Mitchell is currently being held at the Camden County Jail with a $25,000 Cash or Surety bond.

On July 22, 2021, Lebanon Officers were contacted by Lebanon Family YMCA after a report that Mitchell
had been exposing his genitals to children who were attending the YMCA Summer Day Camp. After
further investigation, this behavior was found to have occurred on multiple different occasions.

Mitchell was taken into custody on his warrant by Camden County Sheriff’s Deputies for the above charges on
July 26, 2021 without incident.

The above charges are mere accusation and are not evidence of guilt. Evidence in support of these
charges must be presented before a court of competent jurisdiction whose duty is to determine guilt or innocence.