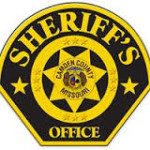 A Camdenton man has been arrested for assaulting his girlfriend and holding her against her will.  Bryan David Cook was taken into custody by the Camden County Sheriff’s Department after police responded to south side drive to investigate a report of domestic assault.  When police arrived at the scene they found cook’s girlfriend on the porch but she then went back inside the home.  When police attempted to make entry, the door was locked and the woman was yelling that cook would not let her leave.  Police were eventually able to enter the home and then made the arrest.  Cook has been charged with felony domestic assault and false imprisonment and was booked into the Camden County Jail.