The Candidate Forums Are Presented By More money is coming to the Lake Ozark Police Department. Following a donation of guns, ammunition and training made by Springfield Armory worth nearly $20,000, another local business owner is stepping up with cash for the department. According to the city George Tucker of Tucker Shuckers has handed over $7,500 dollars. Chief Gary Launderville says he took a call from Tucker asking what he could do for LOPD officers and that the money must be given to the Police Department only. To thank Tucker for his donation, the city’s Board of Alderman adopted a resolution of thanks and you … END_OF_DOCUMENT_TOKEN_TO_BE_REPLACED 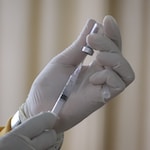 As pushback and defiance of Washington DC’s COVID shot mandates continues, one local attorney is talking about the future relationship between businesses and their employees. "This is going to be a huge impact as folks continue to look forward. I think employers are going to struggle with "how do I deal with this COVID 19 thing" and "How do I let people back into my business" as opposed to not" says Attorney At Law David Porter. He tells KRMS News Lake Area businesses need to have their own plan moving ahead "Don't let yourself get carried away with the global and national rhetoric and … END_OF_DOCUMENT_TOKEN_TO_BE_REPLACED

The mayor of Osage Beach will be appointing someone to fill a vacancy created when Ward 3 Alderman Tom Walker resigned August 6th. A majority of the Board members remaining will have to give their consent for the candidate that’ll serve the unfinished term that runs through April 22nd. The be eligible for consideration, you have to be 18 years old, a U-S citizen, an Osage Beach resident for a year and you have to have to live in Ward 3. … END_OF_DOCUMENT_TOKEN_TO_BE_REPLACED

The Environmental Protection Agency and the Missouri DNR disagree on Lake of the Ozarks landing on a list of ‘Impaired Waterways.’ But the EPA is also explaining what that list of 40 impaired water bodies in Missouri means. "All of the Lakes we're talking, these 40, are being listed for chlorophyll" says Jeff Robichaud with the Water Division Director for EPA Region 7, "What happens is you get high levels of nitrogen and phosphorous and you get the creation of algae blooms and when that occurs...it can affect aquatic species, mainly fish." But Robichaud tells KRMS News the designation … END_OF_DOCUMENT_TOKEN_TO_BE_REPLACED The Camden County Commission is showing unity in standing up to the Biden Administrations new vaccine mandates. "We're all 3 dead set against this" says Commissioner Don Williams, "This has to do with taking away people's freedom of choice...their freedom of Liberty." Presiding Commissioner Greg Hasty says his first call after learning about Washington’s vaccine mandates was to James Gohagan, then the three Commissioners then set up an executive session to talk things over. "Based on my conversations with all 3 county commissioners....we agree, that we would all 3...rather be removed … END_OF_DOCUMENT_TOKEN_TO_BE_REPLACED

More Posts from this Category