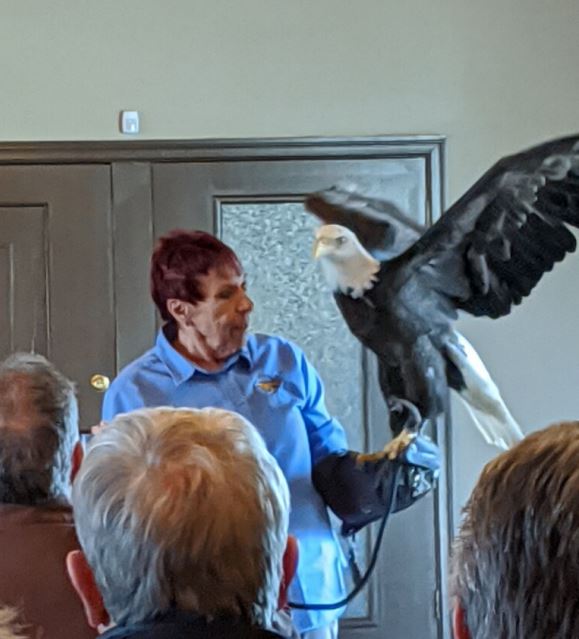 Ameren Missouri’s Lake of the Ozarks Eagle Days is being postponed.

The Eagle Days Committee says the event will now be held Saturday, March 6 at the Regalia Hotel and Conference Center and the Osage National Golf Resort.

The event will be one day only and will feature several species of eagles and owls.

Eagle Days started in 1999 with around 650 people showing up.

Last year more than 37-hundred came to the event.

(Lake Ozark, MO) January is right around the corner, which would normally mean that Ameren Missouri’s Lake of the Ozarks Eagle Days was too.  Well like many other things that were supposed to happen over the last year, the upcoming Eagle Days event will be different this time around too.

With community safety first and foremost in mind, the Eagle Days Committee has decided to postpone the event until later in the spring in hopes that we can host it safely and have more options weather permitting.  “After much discussion about the current situation we are in and where it looks like things are going, we came to the conclusion that it didn’t make much sense to have a great free community event when it really wasn’t necessarily good for the community to have it,” Michelle Cook, committee member shared.  “We hope things will have calmed down a bit more later in the spring so we can continue with this annual event many of us look forward to year after year.  It will look at little bit different this year, but we hope to return to the traditional event in the future.”

Mark your calendars for Saturday, March 6th, 2021 for a day of free fun and learning more about creatures that live in your own back yard.  This year will be a 1-day event featuring the live bird programs at Osage National Golf Resort and Regalia Hotel & Conference Center.

World Bird Sanctuary will return to Osage National with the Live Eagle Programs, which will feature 4 different species of eagles including a bald eagle.  Programs will begin on the hour starting at 9am.

Dickerson Park Zoo will be at Regalia Hotel & Conference Center featuring two different live bird programs.  One will feature the Bald Eagle and the other is all about Owls of Missouri including the four native owls to Missouri.  Programs will begin on the half hour starting at 9:30am.

“We are hopeful by moving to later in the spring we will be able to at least have the live bird programs which are the event’s biggest draw,” Joann Billington, committee member and Master Naturalist stated.  “Weather depending, we may not have as many migrating eagles that time of year, but hopefully our local resident eagles will be active around the Osage River as they are many times throughout the year.”

The committee is still trying to determine how to incorporate other aspects of the event safely and will be making announcements after the first of the year.  Visit www.lakeoftheozarkseagledays.com for updated information or follow us on Facebook for updates.  We sincerely appreciate the community’s continued support for Ameren Missouri’s Lake of the Ozarks Eagle Days and hope to see you on March 6, 2021.