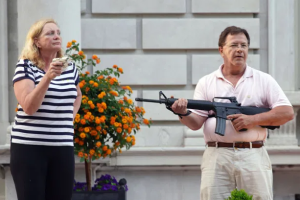 Missouri Governor Mike Parson is defending the actions of a St. Louis couple who pulled guns on a mob that broke into a private, gated community on their way to protest at the mayor’s house.

Parson refers to the ‘Castle Doctrine’ as justification for the couple’s actions.

Video of Mike and Patricia McCloskey’s standoff with demonstrators went viral, and then circuit attorney Kimberly Gardner threatened legal action against the couple.

Parson says Attorney General William P. Barr “was represented on the call,” and he thinks the president and the attorney general “are going to take a look” at the McCloskeys’ case.

The prosecutor investigating the McCloskeys, St. Louis Circuit Attorney Kim Gardner , responded on Twitter by accusing Trump and Parsons of playing politics with a local criminal investigation. Gardner said the facts of the case and the applicable laws are still under review and she would “apply them equally, regardless of the people involved.”