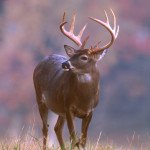 That means there’s deer everywhere around the Lake Area and officials are reminding everyone to stay safe, whether they’re hunting for deer or staying away from the deer on the roads.

With the first archery deer hunting period ending Friday, hunters are now breaking out their calibers of choice for the November portion of  the firearms season.

The department of conservation says the daily hours for the season begin one-half hour before sunrise until one-half hour after sunset, with some counties having antler-point restrictions in place.

Also, if you harvest deer from certain counties in the CWD Management Zone anytime this weekend, you are required to take it to a sampling station.

The November portion of the deer firearms season comes to an end at 5pm on Tuesday, November 23rd.

The deer hunting season, across all methods, looks pretty successful across the Show-Me State so far.

According to the conservation department, statewide to date, there have been 61,680 deer harvested with over 35,000 being antlered and button bucks.

Benton County is next with a total harvest of 844 followed by Camden County with 716 and Miller County with 643.

The numbers are, most likely, going to show a marked increase over the next couple of weeks with the November portion of the firearms season opening up this weekend.

Driving on the roads:

It’s no secret here at the lake but it’s that time of the year when deer are just about everywhere and, unfortunately, will be the cause of more than just a few headaches when they run out in front of you while you’re driving.

“If you can avoid a deer, by slowing down, do it. If you cannot, then hit the deer and try to maintain control of your vehicle while slowing down” says MoDOT Central District Area Engineer Bob Lynch.

The majority of deer-strike crashes occur this month, most commonly between 6-7am and 6-7pm.

And, in most cases according to MoDOT and the highway patrol, when you see a deer on or close to the roadway, chances are there are a few more to watch for in the same area.