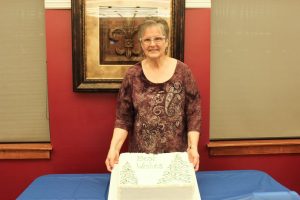 Moore has served in the district for more than two decades in numerous roles, including being a Shelver, Youth Services Coordinator and a branch manager at the Osage Beach location.

Moore also worked with both the Camdenton School District and School of the Osage by hosting reading programs, some of which included murder mystery nights for the older students and read-along programs for younger students.

Library officials say that Kendra Purtle will take over as acting branch manager.

Please join us in extending best wishes to Vicky Moore, who is retiring from the Camden County Library District on January 1, 2021. Vicky has been a valued employee of the Library for 21 years. She will be greatly missed by patrons and staff.

Vicky started with the Library in 1999 at the Osage Beach Library and moved to the Camdenton branch in 2005, to become the Youth Services Supervisor. In this role, she coordinated storytimes, literacy programs, murder mystery nights for teens, and served in an advisory role regarding school interests.

In 2015, she took on the role of Branch Manager at the Camdenton Library. Then she transferred to the Osage Beach Library as the Branch Manager. During this time, she continued to entertain and delight babies and toddlers at storytime.