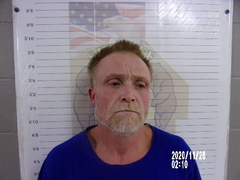 A Morgan County man has been charged with 1st-degree assault following an altercation at the county jail.

According to a report, inmate Buddy Griswold assaulted fellow inmate John Stafford, causing Stafford to be sent to University Hospital in Columbia for life-saving treatment.

Investigators say Griswold indicated that he only hit Stafford “Three times” and it “Wasn’t very hard.”

Rock Blasted In Lake Ozark Is Now Being Crushed And Sold