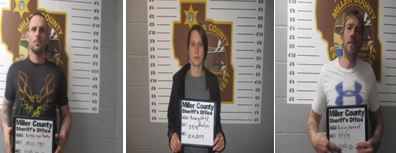 “Whether you’re driving a car or operating a boat, it’s important to be sober and clear about what you’re doing out there” says Captain Michael Petlansky, Director of the Missouri State highway Patrol Water Division.

He tells KRMS News their goal is to continue the safe trend set last year “nationwide I think the Coast Guard was looking at a 20% increase in boating fatalities, but here in Missouri? We actually had a reduction, so that’s what we want to key up on this year…we want to continue that trend and reduce fatalities out there.”

Safety officials say it’s also important to make sure life jackets are accessible and that the best idea is always make sure people are wearing them…and If kids are found wearing life jackets by the Patrol on the Lake, they might get a reward.

“We love to see them wearing their life jackets and if they’re wearing them? We’ll hook them up with a T-Shirt. That’s a good thing to get caught doing” says Lieutenant Stephen Burgan with the Water Division.

He says Ameren Missouri provides those t-shirts for kids found wearing their life jackets on the water.

Another thing that Ameren is helping to inform boaters about is Dock Safety on the Lake of the Ozarks “your # 1 safety responsibility is your electrical system. Is it safe? Have you inspected it? We just had a tremendously rough winter here on the lake, lots of up and down water…icing conditions. Have you been out to inspect your electrical systems?” says Bryan Vance with the Ameren Missouri Shoreline Management office.

Troopers will be offering free courtesy boat inspections in Osage Beach at Public Beach #2 as well as inspections are at Truman Lake on the west side of the dam from 11AM until 2PM this Saturday May 22nd.

National Safe Boating Week runs May 22nd through May 28th.