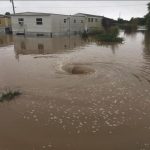 The National Fire Protection Association has released its annual U.S. Firefighter Fatalities report and it’s a case of good news and bad news. The good news -the number of firefighter fatalities while on duty, for 2017, came in representing the lowest total reported since 1977. The bad news – there were still 60 firefighters that died while on duty. The NFPA report indicates that it’s the sixth time over the past seven years for the fatality count to come in under 70. Volunteers accounted for 32 of the 60 fatalities while there were 21 career firefighters, three employees of federal land management agencies, two contractors with federal land management agencies and two prison inmates in the total. 17 of the 60 fatalities occurred at fire scenes representing the second-lowest number since the inception of the study.