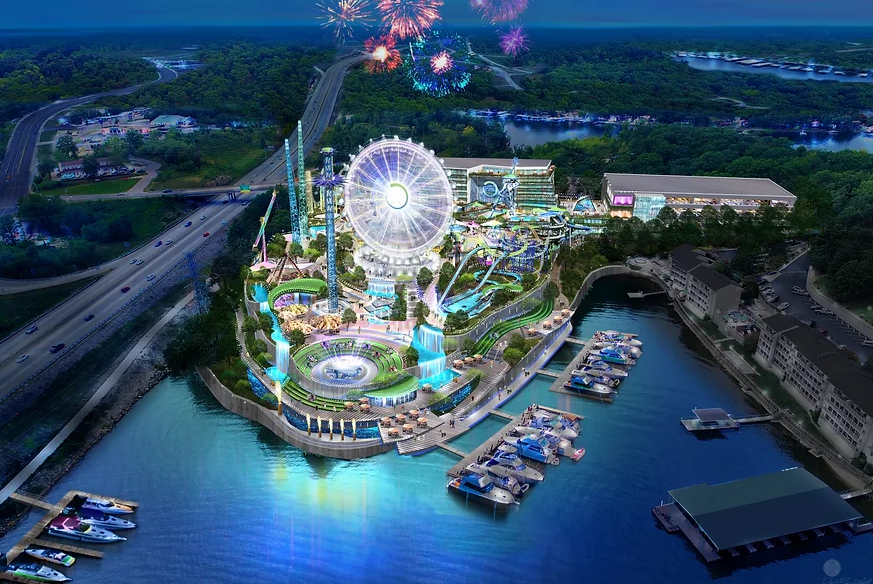 A team of developers, local officials and businesspeople have announced plans to build a year-round theme park on the Lake in Osage Beach.

Among them, developer Jeff Tegethoff tells KRMS news…“This is on the former Lake Port Marina site…that Fred Ross, the owner of Big Thunder bought over the past couple of years. So, right over the Grand Glaize Bridge we’ll be turning some 20 acres of land into hotel, restaurant, amusement rides, attractions, a marina with a boardwalk, a performance stage….the real focus of the project is to bring year-round family friendly entertainment to the Lake area and the hallmark of the site, will be a 200 foot tall observation wheel with over a million LED lights on it.”

Tegethoff and others joined the Friday edition of the Morning Magazine to discuss the proposal in detail…He says construction will begin in 2023 and the theme park will be open in the summer of 2024 and some features will run all year long… “The 200 foot tall wheel will be operating year round, it will have heated gondolas. So that will operate year-round, though some of the rides will have to shut down. But we will have indoor and outdoor water park attractions attached to the hotel as well as a state-of-the-art arcade.”

Plans include hotels, restaurants, an amphitheater, marina and boardwalk. As well as roller coasters, thrill and family rides and a 200-foot-tall observation wheel.

Tegethoff says it’s a vision that takes a number of people to make it a reality…“Fred ross came to me a while ago and shared with me his vision to create this iconic family friendly epicenter here at the Lake of the Ozarks….so he sent me on a mission to make this happen and I ultimately partnered with the team at Skyview patterners, who have a national reputation for executing places just like this. I don’t think you can underestimate the impact that this $300 million dollars worth of development will have on the Lake Area, but also the State of Missouri. It will create over 500 full time jobs and the site is estimated to bring in over 500,000 visitors annually.”

The City of Osage Beach is excited to share the announcement made today by the St. Louis-based SkyView Partners and Tegethoff Development. Formal submission of plans was received today by the developers.

Oasis at Lakeport, a new $300 million family resort and entertainment district to be developed along the Lakeport property acquired by Big Thunder Marine in 2021, at Highway 54 and Jeffries Road adjacent to the Grand Glaize Bridge. Plans include the development of a family friendly tourist destination, with construction slated to break ground in 2023 and open in summer 2024.

“Oasis at Lakeport will be an offering unlike any other in the region. We are excited about the opportunity to form a partnership with the Osage Beach community to build a new entertainment district for generations to enjoy,” said Todd Schneider, co-managing partner of SkyView Partners. “We look forward to elevating the family friendly offerings at this proven tourist destination.”

“I am pleased to announce another development in the city of Osage Beach,” said Jeff Tegethoff, founding principal of Tegethoff Development. “The Oasis at Lakeport project furthers my commitment to this community and its future.”

Fred Ross, owner of Big Thunder Marine and the Lakeport property, saw immense potential in the location since he first embarked upon the four-year endeavor of its acquisition. “Our pursuit of this property was propelled by an unwavering vision of its eventual development into an iconic family focused entertainment epicenter, and a tremendous asset to the Lake of the Ozarks. I couldn’t be more thrilled to partner with SkyView and Tegethoff to execute upon this vision, and witness its manifestation into what will soon contribute endless memories to visiting families, and immense commerce to the Ozark community.”

Construction plans include the creation of a year-round entertainment destination offering 20 acres of amusement rides and attractions along with hotels, restaurants, amphitheater, marina and boardwalk. Amusement offerings will include roller coasters, thrill and family rides and a 200-foot-tall observation wheel.

“The Osage Beach community has been asking for more family friendly entertainment options, and I am proud to work with SkyView Partners and Tegethoff Development to help deliver such a large investment to our city,” said Osage Beach Mayor Michael Harmison. “This world-class team has a proven track record of providing high quality developments and attractions across the U.S.”

“Oasis at Lakeport will generate over 500 jobs and bring 500,000 visitors to Missouri, further enhancing tourism, one of Missouri’s leading industries,” said Lieutenant Governor Mike Kehoe. “I welcome this project for its future impact on mid-Missouri’s economy as well as its commitment to bringing a centrally located, state-of-the-art entertainment district to the Osage Beach community.”

About Oasis at Lakeport

Oasis at Lakeport is a $300 million entertainment district to be developed in Osage Beach, Missouri, at the Lake of the Ozarks, created by St. Louis-based SkyView Partners and Tegethoff Development. Oasis at Lakeport will be a premier Midwest tourist destination offering amusement rides and attractions, hotels, restaurants, amphitheater, marina and boardwalk, and will open summer 2024.

Tegethoff Development is the preeminent luxury lifestyle developer in the Midwest. With experience in master planned suburban mixed-use, historic renovations and boutique urban apartments, Tegethoff develops trophy assets in the communities they serve. Their roots in the Midwest region and on-the-ground perspective allow them to anticipate the trends driving the future of real estate in each market. Tegethoff Development has curated a collection of highly desirable, location-driven properties that offer modern amenities and aesthetics today’s residents desire.