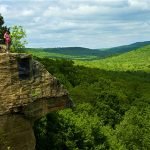 Apparent late night munchies may have played a contributing role in a late night-early morning pursuit that ended with one in custody in Lake Ozark.

A probable cause statement filed in the Camden County Courthouse allege that the sequence of events started Monday in the area of State Highway-242 and Bagnell Dam Blvd.

In it, a nearby officer was alerted by the sound of screeching tires.

The subsequent pursuit across the toll bridge and back into Lake Ozark reportedly reached speeds over 100-miles-her-hour with the driver, eventually, pulling over off South Fish Haven and attempting to flee on foot.

Further investigation uncovered a marijuana pipe and wax in the vehicle along with a frozen pizza, sour candies and soda allegedly taken from Jiffy Stop.

Isquierdo faces 12 charges in connection to the incident and is being held without bond in the Camden County Jail.