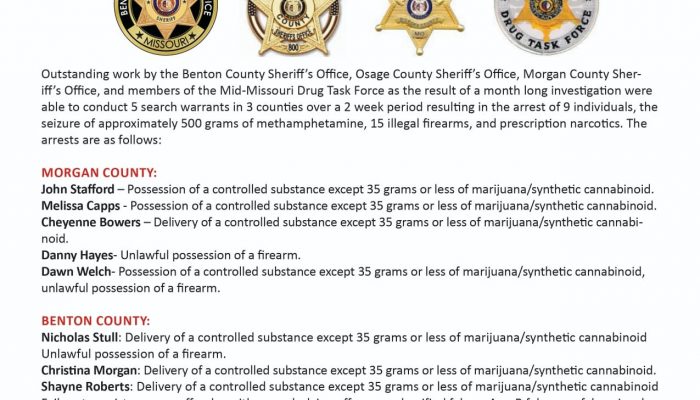 Three people from Sedalia are facing charges in what the U-S Department of Justice is calling a conspiracy to distribute methamphetamine.

In a release, the D-O-J says police took close to 30 guns out of a home during the investigation.

Johnson is facing an additional charge of possession of a firearm in furtherance of a drug-trafficking conspiracy.

JEFFERSON CITY, Mo. – Three Sedalia, Missouri, residents were indicted by a federal grand jury today for their roles in a conspiracy to distribute methamphetamine after law enforcement officers seized 28 firearms from a residence during the investigation.

Today’s indictment alleges that Johnson, Lawson, and Janes participated in a conspiracy to distribute methamphetamine in Pettis County, Mo., from April 1 to June 15, 2021.

In addition to the conspiracy, Johnson is charged with possessing firearms in furtherance of the drug-trafficking conspiracy. Law enforcement officers seized 28 firearms from Johnson’s residence while executing a search warrant on June 15, 2021.

Lawson and Janes also are each charged with one count of possessing methamphetamine with the intent to distribute.