Weather officials say new data indicates there will be more tornadoes for the Mid-West in 2021 than previous years.

Forecasters with AccuWeather say January and February started well behind normal, however a massive uptick in March of 180 tornadoes quickly reversed that trend.

The Storm Prediction Center says we could see 1,350 to 1,500 tornadoes to touch down this year, an increase from 2020 when a total of 1,245 tornadoes were observed.

Residents in the Southeast are starting to become too familiar with the sound of tornado sirens and the roar of destructive winds and flooding rain.

AccuWeather Global Weather Center – April 2, 2021 –  As the climatological peak of tornado season draws near in the United States, AccuWeather forecasters are warning that the season is just getting started. March, April and May are typically the most active in terms of tornadoes, but this year, April and May could be particularly dangerous as the ingredients come together for frequent outbursts of severe weather.

Many communities across the southeastern U.S. are still picking up the pieces from early-season storms, including in Mississippi, Alabama and Georgia, which were hit by back-to-back tornado outbreaks in March. This was only the second time that the National Weather Service (NWS) issued two ‘high-risk’ threats during the month of March, both of which were focused on the same region. 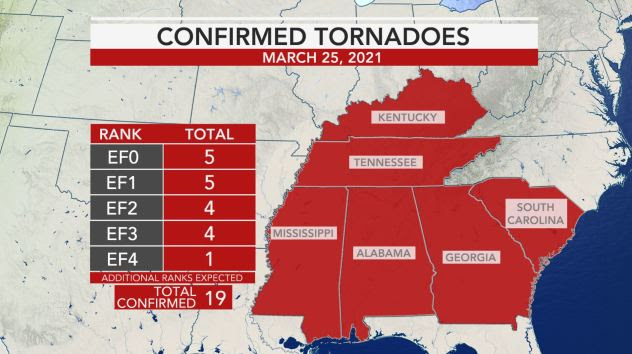 The preliminary tornado count through March 31 stands at 207 across the U.S., according to the Storm Prediction Center (SPC), nearly half of which were reported during two outbreaks, one on March 17 and another on March 25. The second of the two outbreaks was the deadliest, claiming the lives of at least six people. The same eruption of storms spawned an EF4 tornado that tracked through the Atlanta suburb of Newnan, Georgia, in the middle of the night.

After tornadoes paced well behind normal in January and February, March’s uptick reversed that trend. The 180 tornadoes in March easily eclipsed the three-year monthly average of 82 tornadoes, according to the SPC.

Residents in the Southeast are starting to become too familiar with the sound of tornado sirens and the roar of destructive winds and flooding rain.

“It’s nerve-wracking, but for the most part, everybody knows what to deal with, what to do,” Wesley Hamner of Tuscaloosa said.

The worst may be yet to come with severe weather season about to shift into high gear.

AccuWeather forecasters told Wadell they are predicting 1,350 to 1,500 tornadoes to touch down across the country this year, which is slightly above the annual average of 1,383.

That prediction is an increase from 2020 when a total of 1,245 tornadoes were observed, according to records kept by the SPC.